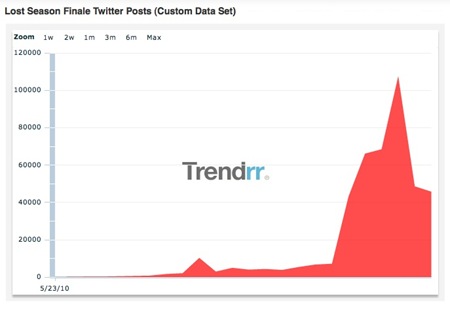 There were more than 400,000 tweets during the Lost season finale; I didn’t make any of them, or read any of them in real-time, but not for a lack of interest. Rather, as I write this post (on Tuesday, 25 May) Australia has still not screened the Lost finale; it’s scheduled for Wednesday night on Seven. While Seven have reduced the delay between US screenings and Australian broadcast times, as was noted in yesterday’s links, the finale was simulcast live in the UK, Italy, Spain, Portugal, Israel, Turkey, and Canada but that was not the case down under. To add insult to injury, Seven couched this decision as service to Australian Lost fans:

Channel Seven will not screen the 2½-hour finale until 8.30pm Wednesday. A spokeswoman for the station said a Monday afternoon simulcast was considered, but it was felt fans would find the show more easily in its current timeslot – although the finale has been upgraded from digital channel 7TWO to Seven. […] ‘Ridiculous,” says comedian Wil Anderson, a Lost die-hard. ”If I was going to watch it on Wednesday, I could not go on the internet at all for two days. I will definitely have watched it by Wednesday.”

Better to have said nothing, or spoken plainly that they’ve decided the ratings boost from the Lost finale would be insufficient to justify tinkering with their Monday line-up, but to have Seven claim that the delay is to make things easier for Lost fans in Australia is really pretty offensive.

On the 400,000+ tweets made during the Lost finale by those who could see it live:

“And that is a conservative estimate,” said Mark Ghuneim, chief executive [of WiredSet]. That beat the show’s average of 27,000 tweets during the season, but was still a smaller volume overall than an event like the Oscars, said Mr. Ghuneim. “We tracked about 780,000 tweets during the Oscars,” Mr. Ghuneim said. “But it’s still an impressive number.” In addition, he said, tweets about the show peaked during commercials. “Instead of running to the fridge during commercial breaks, people were running to their laptops and phones,” he said.

From those comments, Twitter is a boon to commercial television: a social media tool which encourages real-time viewing, which actually justifies the ad breaks as times to reflect, comment and connect with other fans (with the ads still blaring away rather than risk missing the opening of next act), rather than skipping the commercials altogether. For so many Lost fans, that sense of shared viewing made the finale much more meaningful event television, whether you loved it, or hated it. Spreading that conversation across North America and sizable chunk of Europe made it even richer, but those riches were denied Australians. What Seven fails to understand, is that a delay of just over two days may as well be two decades; most people I know in Australia have already seen Lost via means which aren’t legal, be that a peer to peer download, or circumventing the geographic restrictions for an online replay-service like Hulu. Lost succeeded admirably in creating dedicated fans across the web; Seven succeeded admirably in forcing them to look elsewhere.

Perhaps the greatest irony, and the surest sign that Seven doesn’t understand social media, is the fact that there will be a “Live Blog” on the official Seven Lost pages on Wednesday night. On the web, live means live globally, not live in an arbitrary national sales region bounded by water. Besides which, I live in Perth, on the west coast of Australia, and the live blog wouldn’t even be live here anyway; were I watching Lost in Australia, it’d still be one giant spoiler thanks to Perth being 2-hours behind the East coast.

I’ve written about the tyranny of digital distance before which, in a nut-shell, occurs when the real-time nature of digital information sharing isn’t fulfilled due to historical, political and commercial boundaries which were largely established before the internet, before the web. Not being able to participate in the Lost finale’s global commentary is a poignant example of the tyranny of digital distance in action, and has done nothing for my relationship with commercial broadcasting in Australia. In an era where the immediacy and real-time nature of commentary can add so much to the shared viewing experience, the boundaries which prevent that fan experience can be all the more disappointing and distancing.

For the record: I’ve now seen the finale, and I loved it.