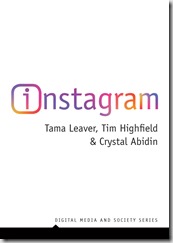 My research on visual social media originated from early interest in meme culture and also from a project that Tim Highfield and I worked on in 2013/14 looking at the way ultrasound/sonogram photos were being shared on Instagram. We developed a unique methodology and tool for extracting Instagram media and metadata for analysis, only to have the technical elements of method become redundant after Instagram completely change how its APIs (the rules for third parties pulling data in and out of their platform) worked! Thankfully, many other tools have since emerged, but after this experience we shifted our focus on to the more qualitative and theoretical explorations, which led to our 2016 article ‘ Instagrammatics and digital methods: Studying visual social media, from selfies and GIFs to memes and emoji’. This work led in a number of new directions, which, in terms of Instagram, has culminated in the 2020 book Instagram: Visual Social Media Cultures which I co-authored with Tim Highfield and Crystal Abidin.

Currently I’m interested in the visual social media landscape more broadly, and in addition to continuing work focused on Instagram, I am also involved in projects focused on YouTube and TikTok.

Leaver, T. and Abidin, C. (2017, 2 May) When exploiting kids for cash goes wrong on YouTube: the lessons of DaddyOFive. The Conversation. https://theconversation.com/when-exploiting-kids-for-cash-goes-wrong-on-youtube-the-lessons-of-daddyofive-76932