Seeing Elon Musk pledge to reinstate Trump on Twitter understandably starts another wave of folks leaving the platform, but if we all leave Twitter, won’t it just become what Trump dreamed Parler would be? 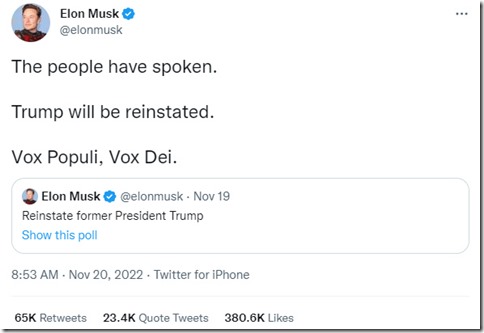 I’ve been on Twitter for more than 15 years, and it’s the platform that has most felt like home for the majority of that time. I’m heartbroken by what Musk has managed to do to the platform and the people who (mostly used to, now) run it in a few short weeks. His flagrant disregard for users or the platform itself is gutting. (I’m with Nancy Baym on what’s being lost here, even if the platform stays online and doesn’t fall over.)

For better or worse, the media broadly (and academia in many ways, to be fair) has used Twitter as a proxy of public opinion. That won’t change overnight. If mostly moderate and left-leaning voices leave, does that give Trump via Musk exactly what he always wanted?

Trump gets Twitter as a pulpit to say whatever half-formed thought escapes his head, and a crowd of MAGA voices to cheer him on at every step. While the echo chamber idea has been widely challenged, it feels like this could be how that chamber would actually cohere.

From outside the US, that anyone, let alone a meaningful percentage, of US citizens believe the Biden election was ‘stolen’ feels like it shows exactly how powerful and destructive the Trump’s Twitter can be.

I don’t want to be putting dollars in Musk’s pocket either as he burns users and employees alike, but I’m deeply conflicted about just leaving the space which still has 15 years of ‘public square’ reputation. I don’t have a solution, but I have many fears.

And, yes, like many I’ve set up on Mastodon to see how that space evolves.

One of the best things about a healthy conference back channel (or, indeed, simply channel now) is the vibrant discussion of and around the various presentations. The down side, though, is that tweets are decidedly ephemeral and tend to disappear quickly afterwards. So, considering the really useful discussion around my papers at Internet Research 13, I figured I should experiment in capturing the most useful bits with Storify. I’ve not used Storify before, but it was very straight forward to create a quick timeline of the tweets I want to keep, like so:

I’ll definitely be keeping Storify in mind for archiving relevant tweets from future conferences; it’s the best of the conversation and the archive.