Beyond Broadcasting: ‘Watching Battlestar Galactica in Australia and the Tyranny of Digital Distance’ 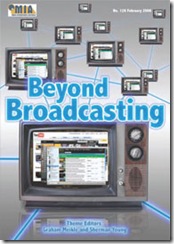 I’m very pleased that the ‘Beyond Broadcasting’ issue of Media International Australia is out, not only because it features some excellent articles asking some great questions about the future of television in the era of digital communication, but also because it features an article of mine that I’ve been thinking about on and off for a number of years. My article, ‘Watching Battlestar Galactica in Australia and the Tyranny of Digital Distance‘ has ideas that will already be familiar to readers of this blog (and, indeed, my old blog Ponderance) as the concepts in this paper have slowly built up over time and appeared sporadically in blog form (such as here and here). When I started writing up these fragments into the final paper and posted the abstract in this blog, I was delighted that it provoked a conversation with some of my blog’s readers. A larger number of people seem to have found their way to that post after hitting NBC’s “We’re sorry, but the clip you selected isn’t available from your location” message and punching it into Google, and a few of them offered a comment on this post before heading elsewhere (quite possibly in search of a proxy so they can watch the US-hosted geo-blocked content).

While the article has taken a couple of years to evolve from the initial idea to this published version, the ideas still seem current. Indeed, there was an engaging debate recently in th US between the New York Times Vulture blog (and here, and here) and film and media scholar Michael Newman over the issue of newspapers and blogs posting spoilers about current TV shows when audiences are increasingly time-shifting and either watching their shows a few days later on TiVO, or a few months later on DVD. As I argue in my paper, the problem of avoiding spoilers becomes even harder for viewers in other countries, when the broadcast (or the option to download legally) is often delayed by a number of months – an issue indicative of what I’ve called the tyranny of digital distance.

I’m also pleased that the editors of this themed issue, and the general editor of Media International Australia were kind enough to give me permission to put up a post-print of my article here. (A post-print, for those interested, is the final version of the article submitted to the journal after the peer review process and final changes to the article have been made, but before the article is page-made and the layout done for the journal itself.) So, if you fancy reading the whole paper and you don’t have access to Media International Australia through your library, you can still read the full paper here.

If you can get hold of the journal, there are a number of other papers which are a great read. One of these, Axel Bruns’ ‘Reconfiguring Television for a Networked, Produsage Context’ can be accessed over at his blog.

As always, any comments or thoughts on my paper or the issues it touches on are most welcome!