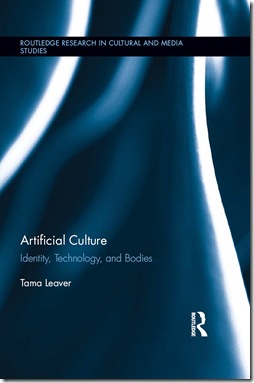 My first book Artificial Culture: Identity, Technology, and Bodies which was published by Routledge in hardback in 2012. (And a much cheaper paperback in 2014! [Amazon link

Artificial Culture explores the question of identity – who we think we are, and how we come to that understanding – by looking at the way the concept of ‘the artificial’ appears in our popular culture. From Artificial Intelligence (AI) to artificial hearts or even artificial sweetener, our understanding of what’s artificial is inescapably linked to how we understand technology. Rather than looking directly at science and technology, however, I’ve chosen to look at the way in a variety of elements of popular culture, including a number of feature films, novels, comic books and other elements of digital culture including the Visible Human Project and Wikileaks. Also, as the our bodies are often a marker of what is most natural, the book asks how technology becomes part of the body (be that an evolution, or invasion, or just a different way to seeing things) and how these changes say something about what being artificial actually means.

The somewhat more convoluted blurb from the publisher’s website:

Artificial Culture is an examination of the articulation, construction, and representation of “the artificial” in contemporary popular cultural texts, especially science fiction films and novels. The book argues that today we live in an artificial culture due to the deep and inextricable relationship between people, our bodies, and technology at large. While the artificial is often imagined as outside of the natural order and thus also beyond the realm of humanity, paradoxically, artificial concepts are simultaneously produced and constructed by human ideas and labor. The artificial can thus act as a boundary point against which we as a culture can measure what it means to be human. Science fiction feature films and novels, and other related media, frequently and provocatively deploy ideas of the artificial in ways which the lines between people, our bodies, spaces and culture more broadly blur and, at times, dissolve.

Building on the rich foundational work on the figures of the cyborg and posthuman, this book situates the artificial in similar terms, but from a nevertheless distinctly different viewpoint. After examining ideas of the artificial as deployed in film, novels and other digital contexts, this study concludes that we are now part of an artificial culture entailing a matrix which, rather than separating minds and bodies, or humanity and the digital, reinforces the symbiotic connection between identities, bodies, and technologies.

Artificial Culture explores and examines a great deal of films, but those which I focus on (by which I mean, make more than a passing reference and go into some detail analysing) are: 2001: A Space Odyssey, Colossus: The Forbin Project, Demon Seed, Lord of the Rings: Fellowship of the Rings (Extended Edition), Lord of the Rings: Return of the King (Extended Edition), Lord of the Rings: The Two Towers (Extended Edition), The Matrix, The Animatrix (Collected Short Films), The Matrix: Reloaded, The Matrix: Revolutions, Spider-Man, Spider-Man 2, Spider-Man 3, The Terminator, Terminator 2: Judgment Day, Terminator 3: Rise of the Machines, and Terminator: Salvation. The novels which I explore in detail are Permutation City and Diaspora by Greg Egan, and the Bridge trilogy — Virtual Light, Idoru, and All Tomorrow’s Parties — by William Gibson. The book also examines some Spider-Man comic books and other elements of digital culture, including the Visible Human Project, Wikileaks and the emergence of synthespians (that is virtual actors like Gollum).

The hardback available from Routledge directly, as are ebook formats. It can be purchased from Amazon US (+ Kindle Version); Amazon UK; Barnes and Noble; Book Depository UK; Book Depository US; and FishPond. If you are ordering from Australia, find the cheapest price via the book price comparison website Booko. The book is a bit on the expensive side, and while I’d be very pleased if the book eventually has a paperback edition, I don’t know when or if that will be possibly, so if you’ve interested and you’ve got access to a University library, then maybe recommend they get a copy in the first instance.

A preview of the first 30 pages of the book, as well as the ability to request inspection copies for possible course use, can be found here.

Leaver’s Artificial Culture is a positive step in our greater understanding of contemporary culture, and I applaud his attempts at grappling with literary and film media in a single volume. […] Libraries are encouraged to purchase a copy because its breadth of research topics and theoretical approaches will appeal to a broad base of scholars.

Artificial Culture is a wide-ranging and well-researched analysis of some important cultural sites that share crucial features of ‘artificiality’, specifically technologically driven artificiality. Leaver gives readers a good introduction to a range of cultural artefacts that suggest that these ‘artificialities’ are a constitutive feature of contemporary technoculture. His thesis is that the construction of these artificialities is placing imaginative and theoretical pressures on conventional understandings – in particular, liberal humanist understanding – of concepts such as ‘subjectivity’, ‘body’, ‘life’, ‘space’ and ‘culture’. For the most part, unlike many studies that discuss a variety of textual productions, Leaver is careful to foreground the specificities of cultural media, especially of film; his readings of individual films as films are particularly well done, including his detailed analysis of special effects in The Lord of the Rings trilogy. I am seriously considering reading some  of Artificial Culture with the students in my senior-year seminar on ‘Science Fiction and Technoculture’, and it would also be an appropriate text to include in graduate courses. Routledge, where’s my paperback?