Like Please Rob Me and I Can Stalk U before it, Creepy is an application which lives up to its name.  It’s a recently-released basic desktop application (Windows or Linux) which scrapes Twitter and a bunch of image sharing services, including Flickr, TwitPic and yFrog, and builds a diary and map of someone’s movements and the times these were logged. Now, Creepy only accesses data which is public, data which is shared online but, like Please Rob Me or I Can Stalk U, it presents this data is a way which isn’t conventionally available.  More to the point, when confronted with a map of your day-to-day activity, plotted on the basis of social media activity, it can be quite confronting.  The tool is described thus on the website:

creepy is an application that allows you to gather geolocation related information about users from social networking platforms and image hosting services. The information is presented in a map inside the application where all the retrieved data is shown accompanied with relevant information (i.e. what was posted from that specific location) to provide context to the presentation.

Additionally, the FAQ adds this detail and rationale:

1) Dude, this app is disturbing , what were you thinking ?

Well, I don’t think that the fact that your geolocation information can be gathered and aggregated is disturbing. The fact that you were publishing it in the first place , is , on the other hand. Just to be clear, the intention behind creating creepy was not to help stalkers or promote/endorse stalking. It was to show exactly how easy it is to aggregate geolocation information and make you think twice next time you opt-in for geolocation features in twitter, or hitting “allow” in the “this application wants to use your current location” dialog on your iphone.

So Creepy does explicitly claim to be an educational tool in the ‘here, look what you’ve already done, now change your habits’ kind of way. Running Creepy just based on my own Twitter information produced a rudimentary map of my logged activity in Perth (clearly Creepy is following data from FourSquare and Flickr images which I posted with my Twitter account): 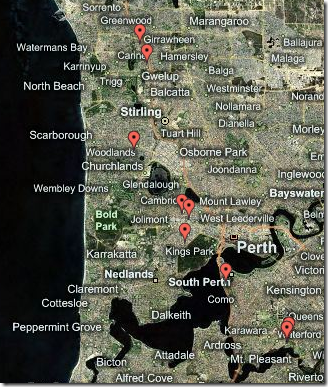 However, when I zoom in a long way, for example onto my workplace, there’s certainly a quite explicit level of geographic information: 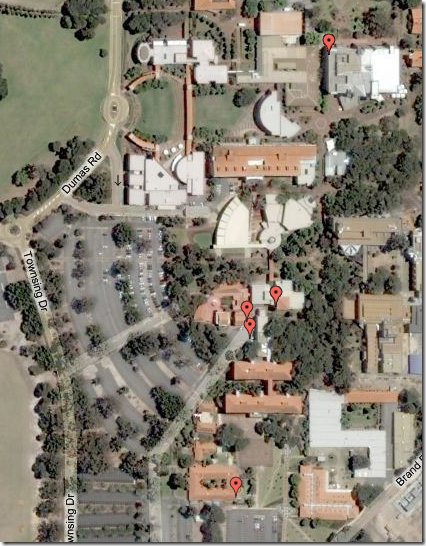 Now, I’m well aware of the data trail my Twitter, FourSquare and Flickr photos generate and acknowledge that if someone wanted to they could aggregate that information and build a reasonable picture of my activity.  The point, though, is that many people aren’t that aware of the data trails they are leaving and that’s what Creepy purports to fix: it’s a very visible, confronting and explicit visualized map of the data trail you’re leaving. It’s not a technical privacy violation, but it might feel like an invasion of sorts.  If it does feel that way, perhaps it’s time to think a little more about how, when and where you share information about yourself on social media and what data is actually embedded in your photos.