So, in an electioneering Australia political landscape most notable for not being notable, it’s the bigots and racists that seem to stand out, and that seems to be the home territory for Family First senatorial wannabe Wendy Franics who, yesterday on Twitter suggested allowing gay couples to be parents was tantamount to child abuse. The rapid, wide-spread dismay and denouncement of her tweets seems to have shaken Francis, who deleted her tweets, only to discover that people take screenshots of stupid stuff other people say online. Indeed, responses to Francis’ bigotry have become a hot-topic on the #ausvotes hashtag, proving that in an election it’s certainly not true that all publicity is good publicity! In a follow-up interview, Francis has been unable to justify deleting her offensive tweets, but has rather gone on to dig an even deeper hole for herself. Meanwhile, the inevitable parody Fake Wendy Francis tweet account – Wendy2TheSenate – is already making the most of Family First’s predicament (it’s a lot more fun to read than her real Twitter account). It’s also interesting to note how effectively Twitter Lists can be used to protest about someone’s bigotry (screen capture; oh, and that picture/link contains some naughty words!).

As this graph shows, within the #ausvotes tweets on Twitter,Francis’ gaffe certainly got attention, more attention even than her party en masse, but that’s not the attention most politicians are after on the way to an election: 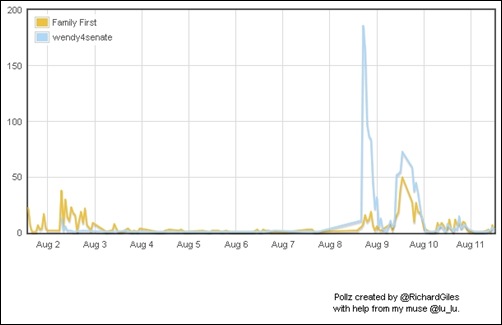