Home » australia » “We’re sorry, but the clip you selected isn’t available from your location:” Watching Battlestar Galactica in Australia and the Tyranny of Digital Distance

I just submitted an abstract for the Media International Australia special issue ‘Beyond Broadcasting: TV for the Twenty-first Century’. Here it is: 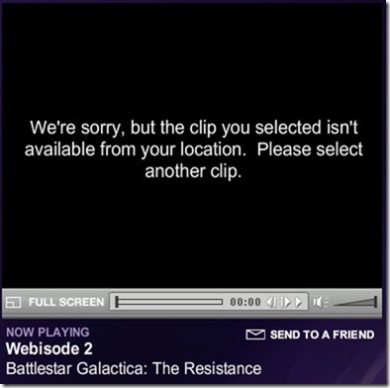 In the late 1960s, conservative Australian historian Geoffrey Blainey coined the term “the tyranny of distance” to describe how the geographic gap between Australia and the centres of the Western world (US, UK) played a fundamental role is shaping the Australian psyche and character (Geoffrey Blainey, The Tyranny of Distance, Sun Books: Melbourne, 1966). Thirty something years later and the world is far more widely considered a global village; the world wide web, email and a million other applications have made real-time information-heavy communication and commerce the norm. However, while information transfers have made ‘distance’ much less of a concern in a number of ways, many policies, practices and systems of commerce still operate as though they are centred on goods moving at the speed of physical shipping, not allowing for information moving at the speed of light down a copper or optical wire. In an era when ‘the tyranny of distance’ means so much less in many contexts, this paper will argue that in the multimedia markets of contemporary society there is, rather, a prevailing tyranny of digital distance which marks out those areas of communication and commerce in which the potential and, indeed, expectation of synchronous global culture (at least for English-speaking countries) leads to constant state of confusion and annoyance – on both personal and legal levels – when those expectations are not met.

The North American-produced television series Battlestar Galactica, re-imagined for the twenty-first century (from an original 1970s series), has consistently been at the cutting edge of television and cross-media. Executive producer Ronald D. Moore and the Battlestar team utilise not just blogs and production-side video-blogs, but also create episodic commentary podcasts, make deleted scenes available online, and have even put two full episodes online for free for viewing. Likewise, Battlestar was one of the first shows available via Apple’s online iTunes Store. Given the amount of extra online content, and the show’s science fiction genre, Battlestar has a large and very active fan community who consume both the television show itself and the officially produced extra material, as well as actively creating and discussing their own derivative ‘fannish’ works ranging from blog commentaries to fan-created videos. Thus, when the show’s producers launched a series of 3 to 4 minutes ‘webisodes’ to re-build interest in the show prior to the launch of its third season, fans across the (wired) globe were understandably excited. However, when citizens of Australia, the UK, Canada or any other country outside the US tried to view these webisodes, they were met with a notice saying: “We’re sorry, but the clip you selected isn’t available from your location.” The owners of Battlestar (NBC) elected to restrict these webisodes to residents of the US only. This decision upset fans across the global Battlestar audience, with US fans quickly circumventing the restrictions and passing copies of the webisodes to their international fellows. In this paper, I will contend that this moment typifies the tyranny of digital distance, exemplifying the legal, ethical and practical issues raised when a globally-promoted television series ‘centres’ on a single national audience. I outline the difficulties of ‘watching’ Battlestar from Australia, and argue for distribution modes which are more in keeping with the technological (and fan-led) potential of digital distribution.

As you might imagine, this paper will draw together my previous thinking about the tyranny of digital distance which you can read about here and here. I’m also finishing off another Battlestar-related paper that stopped being written for a year, but is now being finished off for a new collection. It’s going to be a busy month, but I’m hopeful both of these will be well polished before Emily and I get married on June 9th (presuming this abstract is accepted). Wish me luck!

Update (8 May 2007): The abstract has been accepted! Thankfully, though, full papers aren’t needed until August 1st so I’ll be writing this after Emily and I return from our honeymoon (in Venice!!) :).

Update 2 (21 September 2007): The full version of this paper has been accepted after peer review, and will appear in Media International Australia issue 126, which is scheduled to be released in February 2008.

Update 3 (26 March, 2008): You final version of this paper has appeared, and you can read it following the link from this post.