By Tama in Digital Death, Ends of Identity, Instagram, social media on November 21, 2016. 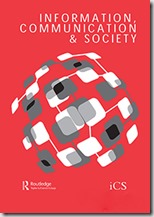 [X] Visualising the Ends of Identity: Pre-Birth and Post-Death on Instagram in Information, Communication and Society by me and Tim Highfield. This is one of the first Ends of Identity article coming from our big Instagram dataset, analysing the first year (2014). We’ll be writing more looking at the three years we collected (14-16) before the Instagram APIs changed and locked us out!  Here’s the abstract:

This paper examines two ‘ends’ of identity online – birth and death – through the analytical lens of specific hashtags on the Instagram platform. These ends are examined in tandem in an attempt to surface commonalities in the way that individuals use visual social media when sharing information about other people. A range of emerging norms in digital discourses about birth and death are uncovered, and it is significant that in both cases the individuals being talked about cannot reply for themselves. Issues of agency in representation therefore frame the analysis. After sorting through a number of entry points, images and videos with the #ultrasound and #funeral hashtags were tracked for three months in 2014. Ultrasound images and videos on Instagram revealed a range of communication and representation strategies, most highlighting social experiences and emotional peaks. There are, however, also significant privacy issues as a significant proportion of public accounts share personally identifiable metadata about the mother and unborn child, although these issue are not apparent in relation to funeral images. Unlike other social media platforms, grief on Instagram is found to be more about personal expressions of loss rather than affording spaces of collective commemoration. A range of related practices and themes, such as commerce and humour, were also documented as a part of the spectrum of activity on the Instagram platform. Norms specific to each collection emerged from this analysis, which are then compared to document research about other social media platforms, especially Facebook.

You can read the paper online here, or if the paywall gets in your way there’s a pre-print available via Academia.edu.

[X] Instagrammatics and digital methods: studying visual social media, from selfies and GIFs to memes and emoji in Communication, Research and Practice, also authored by Tim Highfield and me. This paper came out earlier in the year, but I forgot to mention it here. The abstract:

Visual content is a critical component of everyday social media, on platforms explicitly framed around the visual (Instagram and Vine), on those offering a mix of text and images in myriad forms (Facebook, Twitter, and Tumblr), and in apps and profiles where visual presentation and provision of information are important considerations. However, despite being so prominent in forms such as selfies, looping media, infographics, memes, online videos, and more, sociocultural research into the visual as a central component of online communication has lagged behind the analysis of popular, predominantly text-driven social media. This paper underlines the increasing importance of visual elements to digital, social, and mobile media within everyday life, addressing the significant research gap in methods for tracking, analysing, and understanding visual social media as both image-based and intertextual content. In this paper, we build on our previous methodological considerations of Instagram in isolation to examine further questions, challenges, and benefits of studying visual social media more broadly, including methodological and ethical considerations. Our discussion is intended as a rallying cry and provocation for further research into visual (and textual and mixed) social media content, practices, and cultures, mindful of both the specificities of each form, but also, and importantly, the ongoing dialogues and interrelations between them as communication forms.

This paper is free to read online until at least the end of 2016, but if a paywall comes up, there’s a pre-print of this one of Academia.edu, too.