Since I’ve just signed off on editors’ proofs for my chapter in the forthcoming Cylons in America edited collection, I thought I’d paste this little advertisement from Continuum’s 2007 Pop Culture catalogue to remind myself (and anyone else interested) that it should, in fact, be out before the end of the year … 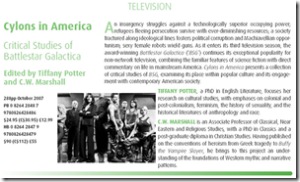 This is my first book chapter (as opposed to a journal article, of which there are a few) and I’m quite excited to see the collection in print in the near future!

Update (15 Sept 07): The publication date for this collection has now been confirmed as January 31 2008 (for the US) and Cylons in America: Critical Studies of Battlestar Galactica

is available for pre-order from Amazon

Update 2 (26 November 07): It looks like the US version will now get a December 10th release! Check out the cover: 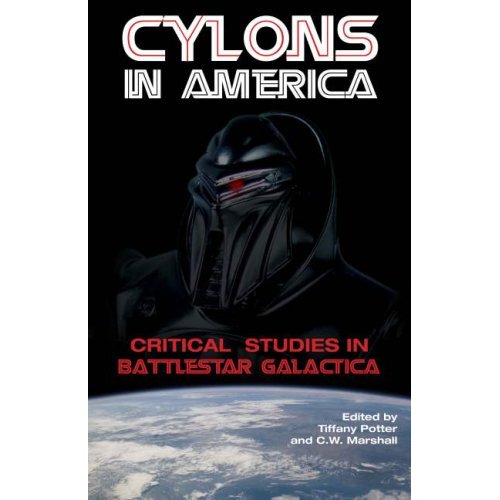 Update 3 (7 Dec 07): As a few people have asked about this book, I thought I’d add the Table of Contents to this post, so you can get a sense of what’s under the cover:

“I see the patterns”: Battlestar Galactica and the Things That Matter – C. W. Marshall and Tiffany Potter

I. Life in the Fleet, American Life