Artificial Culture out in paperback! 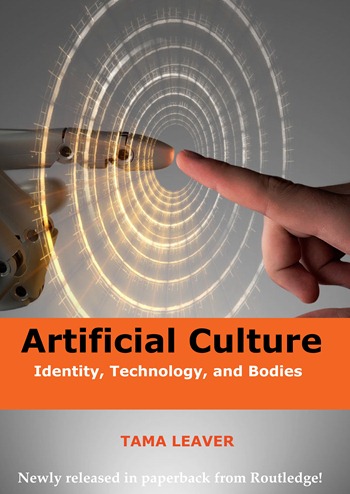 Routledge released my first book, Artificial Culture, in paperback today. While a paperback might not seem that big a deal, I’m actually quite excited. When Artificial Culture first came out, while I was delighted, I was also pretty embarrassed by the $140 price tag. I never really expected anyone but libraries would ever be able to afford it, and I treated my 5 author copies as if they were gold (all given away now, except one). I never had a book launch because I didn’t want anyone to feel obliged to try and buy the book.

I was actually quite relieved to discover that quite a few libraries (and maybe a few humans, too) actually bought a copy. Enough that Routledge have been willing to actually do a paperback run; this was helped immensely by Professor Veronica Hollinger’s kind review in which she asked:

I am seriously considering reading some of Artificial Culture with the students in my senior-year seminar on ‘Science Fiction and Technoculture’, and it would also be an appropriate text to include in graduate courses. Routledge, where’s my paperback?

Thankfully, I can now answer: the paperback’s available widely, and for (really!) $100 less than the hardback, for $US45 (or $39 on Amazon currently

; or for Australians, factoring in postage, Book Depository seems you cheapest option). Update: Routledge have also reduced the price of the Kindle version to match the paperback! 🙂

The cover, I should add, is the same as the hardback, but the poster above is what I fancifully imagine cover art might have looked like if a bespoke design had been possible (I know it’s a bit silly; maybe that’s why I didn’t get to do cover art!).

If you’re curious about the book, the opening material and first chapter can be read for free online. Oh, and anyone going to see the new Alan Turing biopic The Imitation Game might want to read pages 7 to 9 for my take on Turing’s work and life (I’m a big fan!).