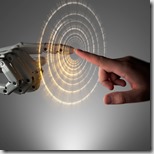 How does the way we consider something artificial influence how we think about ourselves, our relationship with technology, and the way our bodies are situated in both subjective and technological thinking? This broad question drove my doctoral research, which examined ‘the artificial’ in various popular cultural forms, from film and television to novels and digitised informatic bodies. I argue that while the artificial might conventionally be thought to show the boundaries of what it means to be human, rather, under sustained scrutiny, mapping the artificial highlights the fuzzy and increasingly blurred line between people and technology, a dissolution in which, nevertheless, embodiment remains centrally important. My resulting doctoral dissertation, entitled  ‘Artificialities: From Artificial Intelligence to Artificial Culture – Subjectivity, Embodiment and Technology in Contemporary Speculative Texts’ was passed by the University of Western Australia in 2006.

A number of publications have been completed relating to my doctoral research, and exploring the relationship between humans, technology in bodies in different fields.

Leaver, T. (2002). “Your appeal to my humanity is pointless”: The Borg and Radical Performativity in Star Trek. Outskirts: Feminism Along the Edge, 9.