On the Importance of Dating Felicia Day’s Avatar in Australia!

August 19, 2009 / 5 Comments on On the Importance of Dating Felicia Day’s Avatar in Australia!

If you’ve glanced at YouTube, or your iTunes store, or Twitter, or even Facebook in the last few days you may very well have noticed people talking about and linking to this video:

What you might not have realised if you’ve only just heard of The Guild or Felicia Day, is that this little video represents something of a leap forward in terms of indie-based web productions finding a way to make a healthy amount of money while still giving away their content predominantly for free.  For those of you who’ve not come across The Guild before, it’s a comedy web series created and written by Felicia Day (of Dr Horrible and Buffy fame), looking at the ‘real’ lives of six  MMO (videogame) players.  The ‘game’ is never explicitly named, but the characters and situations are largely based on play in and around World of Warcraft.

Anyway, one of the most important things is that after the first season of The Guild, Day very cleverly managed to strike a deal with Microsoft which would allow them to co-produce The Guild and thus season two was initially, exclusively available via the Xbox Live, MSN and Zune websites.  Significantly, Day retained all intellectual property regarding The Guild, meaning that the show remains under her ownership and control (about which Day is rightly proud).  Indeed, just striking that deal is a significant business move for an indie web media creator.  Of course, Day ensured that episodes also appeared on YouTube and other venues after a period of time, ensuring fans could access The Guild in whichever manner they preferred. The Guild has built a very healthy following (as has Day herself, with over a million Twitter followers) and after initially being available for free, Day released DVDs of season one

via Amazon, which have sold reasonably well.

However, the music video which I’m focusing on today is The Guild’s ‘(Do You Wanna Date My) Avatar’ which was written by Felicia Day, features the cast of The Guild, and was directed by Jed Whedon (one of Joss’ brothers, who also co-wrote Dr Horrible).  Initially revealed at Comic-Con, the music video playfully engages with pretty much every stereotype that there is about gamers, electronically dancing a fine line between knowing parody and unadulterated fandom.  Following the deal with Microsoft, ‘Avatar’ was available exclusively on the Xbox and Zune websites for a week, before hitting the rest of the web both for free on YouTube and as paid download via iTunes stores, Amazon and elsewhere.  And that’s where the story gets impressive, as  the music video has hit number one on the US iTunes store and on Amazon as an mp3 download. More to the point, Day has learnt from the successes and problems that Dr Horrible hit last year.

While Dr Horrible was a huge hit in the US iTunes store, there were problems even viewing Dr Horrible outside of the US for the first few days, and it took months before Australians had a legal option to purchase Dr Horrible online 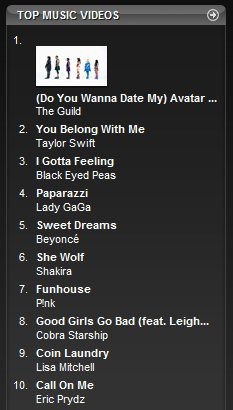 .  In contrast, Day seems acutely aware that The Guild’s fans are spread all across the globe and that all ‘national’ versions of the iTunes store (all of which have separate licensing agreements) should be ready to spread The Guild’s musical talents.  [Update: To distribute the mp3 versions, Day used the Tunecore service which lets artists release their mp3s across a range of international stores simultaneously for a small fee.] The image visible on the left shows today’s Top Music Videos in the Australian iTunes store, with (Do You Wanna Date My) Avatar [feat. Felicia Day] sitting proudly at the top of the charts; it also topped the UK iTunes store (and elsewhere across the globe, too, I’m sure).  While there was a delay of a day or so getting some versions of the music video or mp3 into particular national online stores, Day has no doubt affirmed the loyalty of fans across the globe by ensuring they have access to ‘Avatar’ for free, or to buy, on exactly the same terms as fans in the US. While we may never know exactly how much ‘Avatar’ earns (or even what the music video cost to make) even the $2.59 a pop for the music video in Australia, or $1.69 for the mp3 single, will surely combine with sales across the globe to make a very respectable amount.  Indeed, I’d guess it could make more than a full season of The Guild webisodes!

Most importantly, though, Felicia Day has shown the sort of foresight that comes from being a clever media creator in the digital era: rather than bowing to the tyranny of digital distance, and letting the globe be arbitrarily cut into different regions in which different media companies can license and re-sell content, Day clearly views her loyal fans as a truly global, participative audience who all deserve equal access to the highly enjoyable media she creates! Felicia Day is someone who understands that digital media can, and should, also mean global media.

Now, after all that, if you’ve not done so already, stop listening to me, and check out ‘(Do You Wanna Date My) Avatar’!