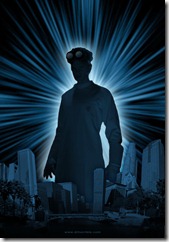 Just to reassure you all that I’ve not turned into a automated link-posting robot, I thought I’d make an actual post since I’m about to head to Brisbane for The Australian and New Zealand Communication Association 2009 conference, held at QUT this week.  It should be a great conference, with a number of my Internet Studies colleagues presenting, lots of great sounding papers and the Oxford Internet Summer Doctoral Programme folks also around QUT at present, making for a pretty vibrant atmosphere, I’m sure!

For those of you interested (or looking at the 5 parallel streams of papers, trying to decide which one looks interesting) here is the abstract for my talk, ‘What Dr Horrible Can Teach Media Creators About Participatory Culture’:

During the 2007/2008 US Writer’s Guild of America strike writer-director Joss Whedon came up with the notion of a one-off online “show” made outside of the studio system, on a miniscule budget, and entirely publicised using the web and social networks. Thus, Dr Horrible’s Sing-Along Blog, a three-act online musical comedy centred on a flawed supervillian, was conceived. In promoting Dr Horrible, Whedon and his team used both official websites and presences on Facebook, MySpace, Twitter, Digg as well as engaging with Whedon’s existing legion of fans via fansites such as Whedonesque.com. Moreover, far from using these websites purely as one-way advertising delivery platforms, the producers, writers and some Dr Horrible actors engaged fans in meaningful dialogue via these platforms.

Fan discussion and remixing of the show emerged rapidly; within weeks of its release there were hundreds of fan sing-along videos on YouTube, joined by everything from fan-created artwork and wallpaper to unofficial sheet music. Far from shunning these unofficial creations, the Dr Horrible producers actively congratulated and promoted the best fan creations. Despite Dr Horrible initially being available for free in its first week, subsequent sales via the iTunes store, and later on DVD, at times rivaled all but the most successful Hollywood blockbusters. Thus, in an era where media companies and startups are increasingly becoming concerned about brand loyalty, not just Nielsen ratings, Dr Horrible may serve as a model for producers and fans interacting in mutually beneficial ways as part of participatory culture. This paper will attempt to examine the way Whedon and his team utilised participatory culture in promoting Dr Horrible, asking which elements built on the foundation of Whedon’s past successes, but even more importantly what lessons Dr Horrible has for both existing and emerging media creators.

And here are the slides I’ll be using:

I’ll probably be Twittering from the conference (Wed – Fri) and I think the default Twitter hashtag will be #anzca2009.

A mere 54 days after it was released in the US (and after a few teething problems, free across the globe for just over a week), the three-episodes of Dr Horrible’s Sing-Along Blog are finally available in the Australian iTunes store (and the UK one, too).  The delay, I’m sure, is less about the desire of the Whedon boys to get Dr Horrible out there, and more about the challenges involved in pushing material into the various national versions of the iTunes store.  This rather long delay serves as a fairly poignant footnote to the talk I gave a little while ago on entitled What Dr Horrible Can Teach TV About Participatory Culture.  It seems there’s still some challenges even the bad doctor can’t immediately overcome.  That said, it’s out now, so here’s a link to the Australian iTunes store; it’s $5.99 for the series, or $2.99 per episode.

In the meantime, the Evil League of Evil has been looking for a few more evil recruits, but you need to apply before Oct 11th! 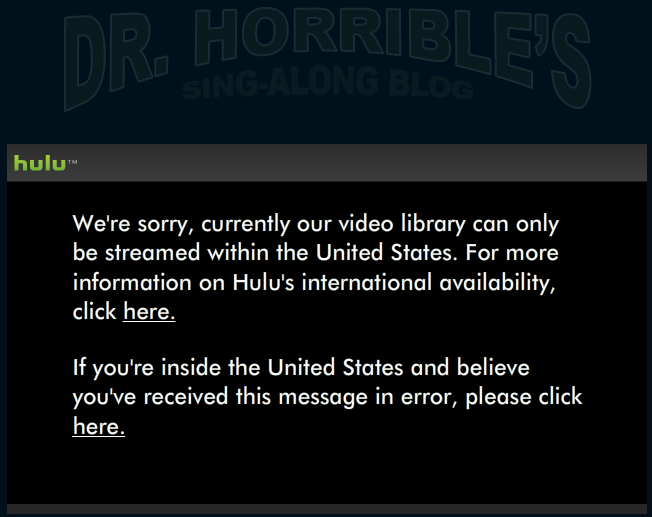 So who the hell is Dr Horrible, and why should you care?  Well, he looks to be quite an amusing character and the centre of a story written by someone who writes quite good stories: Joss Whedon.  More to the point, for a limited time, Dr Horrible’s story will be online … for free.  Oh, and it’s a musical.  From the guy who wrote the musical episode of Buffy.  And quite a few other bits of Buffy, too.

Dr Horrible is as much an experiment in models of distribution and commerce.  From Tuesday July 15th (US time … so some time Wednesday for most in Australia) an episode of Dr Horrible will appear every two days (with three in total), until they all disappear on July 20th.  Joss Whedon (and, indeed, quite a few other Whedon’s, it seems) are hoping that they can galvanise their fanbase (as they did so impressively for Serenity) and once everyone has seen it for free, perhaps sell a few full copies later down the track.  Apparently Joss thought up the concept during the WGA writer’s strike when other distribution methods were sorely needed.  As Joss describes his thoughts in Dr Horrible’s master plan:

Once upon a time, all the writers in the forest got very mad with the Forest Kings and declared a work-stoppage. The forest creatures were all sad; the mushrooms did not dance, the elderberries gave no juice for the festival wines, and the Teamsters were kinda pissed. (They were very polite about it, though.) During this work-stoppage, many writers tried to form partnerships for outside funding to create new work that circumvented the Forest King system. Frustrated with the lack of movement on that front, I finally decided to do something very ambitious, very exciting, very mid-life-crisisy. Aided only by everyone I had worked with, was related to or had ever met, I single-handedly created this unique little epic. A supervillain musical, of which, as we all know, there are far too few. The idea was to make it on the fly, on the cheap – but to make it. To turn out a really thrilling, professionalish piece of entertainment specifically for the internet. To show how much could be done with very little. To show the world there is another way. To give the public (and in particular you guys) something for all your support and patience. And to make a lot of silly jokes. Actually, that sentence probably should have come first. […]

3) Joss, you are so kind, and generous, and your forehead is like, huge, like SCARY, like I think I can see Cary Grant and Eva Marie Saint hanging off it… what can WE do to help this musical extravanganza?

What you always do, peeps! What you’re already doing. Spread the word. Rock some banners, widgets, diggs… let people know who wouldn’t ordinarily know. It wouldn’t hurt if this really was an event. Good for the business, good for the community – communitIES: Hollywood, internet, artists around the world, comic-book fans, musical fans (and even the rather vocal community of people who hate both but will still dig on this). Proving we can turn Dr Horrible into a viable economic proposition as well as an awesome goof will only inspire more people to lay themselves out in the same way. It’s time for the dissemination of the artistic process. Create more for less. You are the ones that can make that happen. Wow. I had no idea how important you guys were. I’m a little afraid of you.

So, once more, the success or failure of a Whedon idea is in the hands of fans. If you want to spread the Horrible word, the website has lots of spiffy banners you can use to link to Dr Horrible’s show.  It should be an interesting experiment. I’ll certainly be watching! (Early reviews seem very promising!)