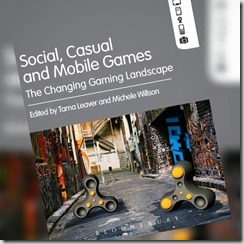 Michele Willson and I are delighted to announce that our collection Social, Casual and Mobile Games: The Changing Gaming Landscape has been released by Bloomsbury Academic.

Here’s a quick blurb and the contents and contributors:

Social, casual and mobile games, played on devices such as smartphones, tablets, or PCs and accessed through online social networks, have become extremely popular, and are changing the ways in which games are designed, understood, and played. These games have sparked a revolution as more people from a broader demographic than ever play games, shifting the stereotype of gaming away from that of hardcore, dedicated play to that of activities that fit into everyday life.

Social, Casual and Mobile Games explores the rapidly changing gaming landscape and discusses the ludic, methodological, theoretical, economic, social and cultural challenges that these changes invoke. With chapters discussing locative games, the new freemium economic model, and gamer demographics, as well as close studies of specific games (including Candy Crush Saga, Angry Birds, and Ingress), this collection offers an insight into the changing nature of games and the impact that mobile media is having upon individuals and societies around the world.

Michele and I would like to publicly thank all of our wonderful contributors, the folks at Bloomsbury, and Troy Innocent for the rather nifty cover image. For the book’s launch Bloomsbury are offering 40% off the normal price, which makes the eBook version actually affordable for humans, not just libraries! Details here: http://www.bloomsbury.com/us/social-casual-and-mobile-games-9781501310584/

The front material and first chapter can be read online here (PDF).

“This book is an exciting rogue’s gallery of authors, games and topics at the forefront of modern gaming. The inclusion of issues discussing not only recent developments in design, playfulness and the definition of who plays games, but also attending to the darker aspects of contemporary gaming cultures such as the transition to Freemiun, cheating and GamerGate is an important step in examining new pathways into games and gaming culture. Social, Casual and Mobile Games: The Changing Gaming Landscapedemonstrates through an impressive series of chapters how this genre of games needs to be taken seriously as a cultural marker of today’s players and the games they engage with.”
–  Esther MacCallum-Stewart, Research Fellow, Digital Cultures Research Centre, University of the West of England, UK

“Social, Casual and Mobile Games captures a wide array of scholarship from all corners of Game Studies. The authors explore, from a variety of empirical and theoretical perspectives, a rich tableau of games and players that often disappear from dominant narratives about what makes a game or a game player.”
–  Casey O’Donnell, Associate Professor of Media and Information, Michigan State University, USA, and author of Developer’s Dilemma

“This terrific and timely book is an invaluable guide to the profound ways in which gaming – in all its casual, mobile, and social glory – will never be the same again. Critical research for the rest of the (gaming) world has finally arrived.”
–  Gerard Goggin, Professor of Media and Communications, The University of Sydney, Australia

Bond University and iGEA (Interactive Games & Entertainment Association) have released their Digital Australia 2012 (DA12) report based on a representative sample of Australians (1252 Australian households with 3533 people in them) further demonstrates that gamers are neither outsiders, anti-social, nor all men (almost half aren’t). Some key findings: