Clay Shirky’s ‘Newspapers and Thinking the Unthinkable’ has been getting a fair amount of attention in the past few days and his central point is ringing true for most people: the traditional revenue model of the newspaper is so dead that it might just be time to admit that in many cases news will need to find (a) new platform(s) of choice.  It is worth noting, though, that Shirky is not downplaying the important role journalists have to play in our society; what he has resoundingly challenged is whether collecting their daily output on printed paper has much of a future.  Indeed, Shirky’s conclusion is worth noting:

When we shift our attention from ’save newspapers’ to ’save society’, the imperative changes from ‘preserve the current institutions’ to ‘do whatever works.’ And what works today isn’t the same as what used to work.

I concur; the world at large needs good journalism, but many good journalists will need to find a new home and it’s likely a new medium, too.  On March 12, the New York Times posted this visualisation: 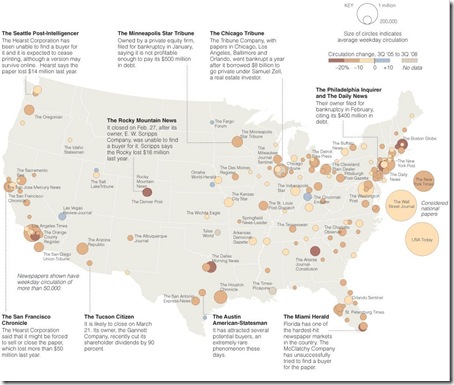 You’ll have to click and see the enlarged version to read the text, but the brown and beige circles show declining circulation numbers for US newspapers; blue circles show increases (there are very few blue dots).  The US is a country of brown and beige dots.  The fact that neither Shirky nor anyone else knows what should come next is an important tension.  For those currently making a living working for newspapers who are laying off staff, this is a really immediate tension and, to be honest, I’m glad I’m not in those shoes.  For society more broadly, the question of where we get our news, and whether we’re willing to pay anything for it – either personally or through an organisation we support, or even through government funding – is something we do need to consider. I have to say, I’m feeling more protective than ever of the Australian Broadcasting Corporation and SBS and have no qualms whatsoever about some fraction of my taxes supporting both.  And sitting at a point of convergence of the best traditional journalism and web 2.0 platforms have to offer, I’m glad that people like Margaret Simons are finding new ways to keep the fourth estate alive and well.  (And to be fair, there is still a lot of quality journalism out there … it just too often gets buried behind the bleeding leads.)

For Perth folks, the paucity of our current choice in newspapers has been obvious for a long time; we only have one and it has spent almost all credibility it ever had.  A new editor is on board now, but it’ll take a lot before The West holds any serious sway or has most people read it for anything other than the TV Guide and Saturday classifieds.  In a well timed move, Perth’s citizen journalism advocate, Brownen Clune, has just relaunched her own web presence, hitting the ground running a provocative post entitled ‘The Emperor’s New Media’ which argues that many journalists lack credibility, and the profession overall is in disrepute, leaving little wonder why so many folks don’t want to pay to read it anymore:

Can we be so quick to blame the business models of newspapers (selling advertisements) when people won’t miss the service (news) they are providing? For years journalists have been regarded alongside used-car salesmen as the least trustworthy profession and every journalist has certainly experienced the polite disdain from strangers when you tell them what you do.

There is something very wrong with the media and the quality of journalism has a lot to do with it. “News” has become so devalued that people are not willing to pay for it.

Bronwen’s post has attracted some spirited comments from Fairfax journo Nick Miller (continuing an older debate, really) who does remind us that Perth certainly hasn’t really developed much of an alternative model as yet (and Bronwen’s PerthNorg, which is valuable, relies a great deal on filtered content created by the mainstream newspapers).  But to return to Shirky’s point, we need more experiments, like PerthNorg, which are willing to try and find new ways to connect journalists of various types with audiences.

In terms of the quality of journalism out there, there’s definitely appetite for more transparent reporting and for reporting that returns more clearly to the notion of the fourth estate; keeping the average citizen informed is, after all, the aim.  If nothing else, the fact that Jon Stewart and The Daily Show (a comedy show!) managed to get so many tongues wagging in the US recently when they went after CNBC’s ethics, and then Jim Cramer in particular when he took issue with Stewart’s criticism, shows that there is real desire for a more robust sense of the fourth estate (even if many people don’t recognise the term any more).  As The Washington Post put it:

Jon Stewart has amassed a passionate following over the years as a sharp-edged satirist, the man who punctures the balloons of the powerful with a caustic candor that reporters cannot muster. As public furor over the economic meltdown rises, the Comedy Central star has turned not just his humor but also his full-throated outrage against financial journalists who he says aided and abetted the likes of Bear Stearns, AIG and Citigroup — especially those who work for the nation’s top business news channel.  Stewart morphed into a populist avenging angel this week, demanding to know why CNBC and its most manic personality, Jim Cramer, failed to warn the public about the risky Wall Street conduct that triggered the financial crisis.

Okay, ‘avenging angel’ might be a bit over-the-top, but Stewart has, in my opinion, re-energised the question of journalistic ethics and, if nothing else, we can see responses like Fix CNBC http://fixcnbc.com/; while the sentiment is noble, perhaps, like, Fix the Newspapers, we need to hope for more?