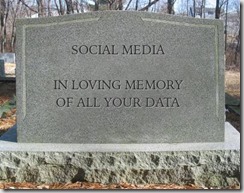 I am interested in what happens to your personal data when you die. What do Google, Facebook, Apple, Amazon, and the hundreds of other companies that hold your personal data do with it when you pass away. Can your loved ones access that data after you die, and if so, how? Can other people delete, edit or curate your data posthumously? Is it ethical for companies to turn your personal data into an online memorial (complete with advertising) to keep friends and family viewing your content after death? Who gets to ‘tell the story of you’ online, when you’re no longer here to influence that story? How realstic or even one-day-possible are shows like Black Mirror that see people resurrected, in some fashion, rebuilt from their social media traces? These are just a few of the interesting and quite pressing questions relating to digital death in the era of digital networks and social media. Below you will find the various publications, presentations and media & press interviews I’ve done relating to digital death. At present I’m (slowly) working on a project about the way digital death is imagined in popular culture from popular but wildly implausible visions in Black Mirror through to less seen but far more interesting films such as Marjorie Prime which might shed some light on how our digital data might be ‘remembered’ in the future.

I am a member of the Australian Death Studies Society.

Leaver, T. Interviewed by Xavier Hazard, What happens to your digital accounts when you die?, Western Independent, 29 March 2018, https://westernindependent.com.au/2018/03/29/what-happens-to-your-digital-accounts-when-you-die/

Leaver, T. interviewed in Cat Rodie, “I’m not ready to go yet” – Death in the time of Facebook, Australian Women’s Weekly, 31 March 2016, http://www.aww.com.au/latest-news/im-not-ready-to-go-yet-death-in-the-time-of-facebook-26284

Leaver, T. interviewed by Matthew Karstunen, ‘A Virtual You Upon Passing and the Implications’, The Daily, 2SER Sydney, 6 November 2014,   [Radio]