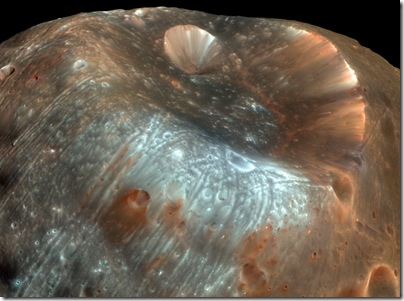 Following on from my previous post about Mars and the wonderful work of the High Resolution Imaging Science Experiment (HiRISE) project, I just had to post the image above which is of “Marshine” (sunlight reflected off of the surface of Mars) on Phobos, one of Mars’ moons.  You can see more of Phobos at it’s HiRISE page, but just take a minute to look at that amazing image.  For me, at least, it really captures the imagination and a sense of wonder about our wider universe! [Via]

Over the last month or so I’ve been slowly re-reading Kim Stanley Robinson’s epic Mars trilogy; I’m a little way into the second book (Green Mars), but my head is still full of the magnificent world-building that Robinson manages in the first installment, Red Mars. Also, oddly enough, I’ve been fascinated by the way that the way that the plotting in Red Mars – which uses flash-forwards, flashbacks and other jumps – is similar to the way the TV series Lost works. There are parallels, too, between the First Hundred (the first human colonists on Mars) and the survivors of Oceanic 815 (in Lost) in terms of the way their lives are ruled by the geographic isolation and unexpected challenges of territories unknown.

More to the point, with the vivid descriptions of Mars conjured by Robinson freshly in mind, I was really struck by a report which highlighted the fact that the High Resolution Imaging Science Experiment (HiRISE) has managed to capture images of an avalanche taking place on the surface of Mars! 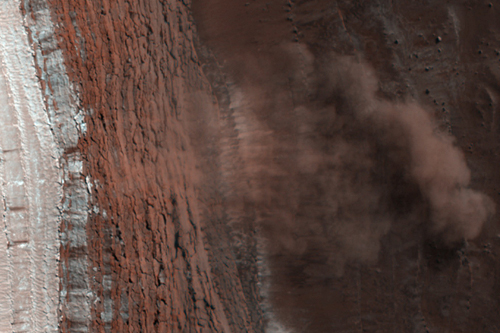 These images really do capture the imagination. Although Mars is often considered close to a dead planet, burnt out and inactive, looking at these amazing photos really does remind me that our closest planetary neighbour holds many mysteries and far from satisfying my desire to know more, these images tantalise the imagination, and make me wonder what other stories the dusty red planet has to tell. [Via io9]