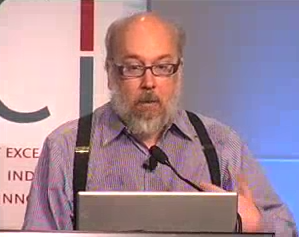 Henry Jenkins’ keynote from the recent CCi conference Creating Value: Between Commerce and Commons has been posted as a series of quicktime movies. In his talk, entitled ‘What Happened Before YouTube?’, Henry builds a bridge between the participatory culture he argued was most prevalent before the internet in fandom (see his book Textual Poachers for details) to the culture now vibrantly apparent for the world to see in the clips and communities of YouTube. It’s an engaging talk, and one well worth listening to. And watch for the self-referential lolcats/loltheorists humour being used! [Via Jean]