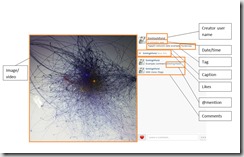 Today First Monday published A Methodology for Mapping Instagram Hashtags by Tim Highfield and myself. This methodology paper explains the processes behind the various media we’ve been tracking as part of the Ends of Identity project, although the utility of the methods go far beyond that. Beyond technical questions, we’ve included some important ethical and privacy questions that arose as we started to explore Instagram mapping. Here’s the abstract:

While social media research has provided detailed cumulative analyses of selected social media platforms and content, especially Twitter, newer platforms, apps, and visual content have been less extensively studied so far. This paper proposes a methodology for studying Instagram activity, building on established methods for Twitter research by initially examining hashtags, as common structural features to both platforms. In doing so, we outline methodological challenges to studying Instagram, especially in comparison to Twitter. Finally, we address critical questions around ethics and privacy for social media users and researchers alike, setting out key considerations for future social media research.

The full paper is available at First Monday, fully open access, with a Creative Commons license. As always, your comments, thoughts and feedback are welcome here, or on Twitter.