While it’s hard to look away from the many disasters still devastating Japan, sometimes we all need a lift, and this little Chatroulette Love Song certainly fits the bill for four minutes:

It’s all rather reminiscent of Merton’s Piano Improv, but that doesn’t mean it won’t warm your heart.

Here’s the first paragraph of my new column ‘How Chatroulette Taught Me Everything I Need to Know About the Internet’ for Flow TV: 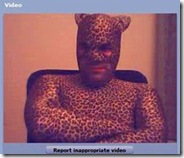 Genetic scientists love the humble Fruit Fly (Drosophila melanogaster) because it has such a short life-cycle; several generations can live, reproduce, pass on genetic material, and die within a month. In this column, I’d like to suggest that Chatroulette is the current fruit fly of the internet, by which I mean, Chatroulette, its users, and the responses to it, evoke many of the big issues facing internet users today, and do so in a far faster and more immediate way than on the internet at large. On the off chance you’re unfamiliar, Chatroulette does exactly what the name implies: the website randomly connects two users with webcams and chat functionality; there are no log-ins, no registration pages and very few rules, none of which appear to be enforced.1 Notably, Chatroulette was created by Andrey Ternovskiy, a 17 year old Russian student who, legally, would be considered a child himself in many countries. With that context in mind, I want to address Chatroulette in terms of search, ‘Sex!’, privacy, copyright and creativity.

If I’ve sparked your interest, please head over to Flow TV to read the rest.

Mashable have managed to track down and interview the mysterious Merton, the guy behind that wonderful Chatroulette Piano Improv video:

Merton seems like a nice enough guy, who genuinely seems taken aback with how viral the video went. This interview also reminds me about the perils of writing about things happening today on the web; in the next issue of Flow I’ll have a column called ‘How Chatroulette Taught Me Everything I Need to Know About the Internet’ which discusses the Merton and Ben Folds, but already be a little out-of-date since it doesn’t refer to this interview.  *hmph*

I submit this video as evidence (a) the Chatroulette is not the work of the devil and (b) it’s probably the heart of cool R&D on the web today:

The Daily Show’s take on Chatroulette, after dismissing the usual reporting moral panics, was hilarious:

Kudos to all the reporters and anchors who played along with the gag!