Resolving a court case stretching back from 2008, Australian Internet Service Provider iiNet was vindicated as the the courts found that Australian ISPs did not ‘authorize’ copyright infringement by providing the internet to customers.  An obviously jubilant iiNet CEO Mike Malone used the press interest in the story to invite copyright holders to work with ISPs in Australia to provide legal avenues for downloading and viewing media, thus meeting the obvious consumer demand.  Nice one!  Here’s the video:

As most people in Australia would now be aware, one of the most important developments in terms of civil rights and the Australian internet has now gone before the courts as a consortium, led by the Australian Federation Against Copyright Theft (AFACT) is suing ISP iiNet for refusing to cut off customers for alleged (not proven!) copyright infringement in terms of bittorent media downloads. From the Age:

The Australian film and television industry has launched a major legal action against one of Australia’s largest internet service providers for allegedly allowing its users to download pirated movies and TV shows. The action against iiNet was filed in the Federal Court today by Village Roadshow, Universal Pictures, Warner Bros, Paramount Pictures, Sony Pictures Entertainment, 20th Century Fox, Disney and the Seven Network. Mark White, iiNet’s chief operating officer, said the company did not support piracy in any form but it could not disconnect customers just because the movie industry claimed they engaged in illegal downloading. Adrianne Pecotic, executive director of the Australian Federation Against Copyright Theft (AFACT), said the action followed a five-month investigation by the industry.

There are also arguments made that peer to peer networks should simply be blocked (although that argument hasn’t been in quit those terms just yet in this case) but that serves as a good opportunity to remember that p2p and, yes, even bittorent, are not intrinsically for distribution of ‘pirated’ media; there are plenty of things, including feature films, being distributed via peer to peer networks which are entirely legal!

One thing this case should, hopefully, achieve, is to test the extent to which recently imported ‘safe harbour’ provisions actually stand up in an Australian court:

"This is a very important test case for the internet industry in Australia," said Peter Coroneos, chief executive of the Internet Industry Association. "It will test the effect of the safe harbour provisions that were introduced with the US free trade agreement, which provides immunity for ISPs in certain circumstances such as transmission, hosting, caching and referencing activities."

However, as this article from Michael Sainsbury and Fran Foo in Australian IT notes, the lawsuit seems to stand on pretty thin legal grounds (disclaimer: I ain’t no lawyer!):

iiNet managing director Michael Malone said when it received AFACT’s complaints, they were forwarded to the Police. "But AFACT refused to talk to the Police," Mr Malone said. Ms Pecotic brushed aside Mr Malone’s explanation, saying: "The law is clear and iiNet knows that. They cannot pass the buck … it is their responsibility." "There were many things that iiNet could have done and at the very least, issue a warning to the customers involved but they did nothing," she said. Unlike a number of other major jurisdictions such as the United States and Britain, Australia does not have blanket agreement between content companies and broadband providers about file swapping. An Optus spokesperson said that under Australian law there are remedies available to copyright holders, including taking action directly against those alleged to be infringing rights. "It is unfortunate that the rights holders are targeting an ISP because under Australian law, internet service providers may generally be considered conduits which provide carriage services, and as such are not responsible for copyright infringements carried out by customers using their internet services,” the spokesperson said. This position is reflected in sections 39 (B) and 112 (E) of the Copyright Act 1968 (Com), and in the safe harbours set out in Division 2AA, which were introduced protect ISPs from being onerously required to enforce intellectual property rights where they are merely providing carriage services.

On the smaller screen front, TV Tonight notes that Channel 7 is part of the group attacking iiNet, although reading the comments on the TV Tonight post, this action seems to have focused even more people’s feeling that they are downloading television shows because local networks simply aren’t providing the goods in a timely or consistent fashion!

iiNet’s own response seems the most sensible part of this whole debacle:

iiNet’s Managing Director Michael Malone said iiNet does not in any way support or encourage breaches of the law, including infringement of copyright. “In reality, iiNet has been leading the industry in making content available legally through our Media Lounge, including agreements with iTunes, ABC iView, the West Australian Symphony Orchestra, Cruizin’, Macquarie Digital TV, NASA Television, Barclays Premier League football, Drift Racing 2007 and classic highlights of golf’s four Majors,” Mr Malone said. Mr Malone said iiNet had not breached any laws and had repeatedly passed on copyright holders’ complaints to law enforcement agencies for investigation. He said iiNet had advised the Australian Federation Against Copyright Theft (AFACT) that their complaints had been forwarded to law enforcement agencies and that they should follow the matter up with them. iiNet’s Customer Relations Agreement clearly spells out that customers must comply with the law and that our service must not be used “to commit an offence or to infringe another person’s rights”. “iiNet cannot disconnect a customer’s phone line based on an allegation. The alleged offence needs to be pursued by the police and proven in courts. iiNet would then be able to disconnect the service as it had been proven that the customer had breached our Customer Relations Agreement,” Mr Malone said.

Relying on the idea that customers are innocent until proven guilty?  Whatever is iiNet thinking?

At the same time this lawsuit was announced, AFACT released the following ‘resource’ – Nothing beats the real thing! How copyright, creativity and citizenship shape our society (subtitle: Film Piracy – Your Actions Can Make a Difference) – which has been mailed on DVD and hardcopy to every secondary school in Australia. The ‘resource’ is structured around addressing film piracy; the ‘civics lessons’ here are, at best, tailored to a very specific commercial aim and, at worst, an advertising campaign trying to make relevant copyright laws which have long since been dismissed as out of touch by the most teenagers.  More to the point, a genuine civics lesson on copyright would spend considerable time discussing fair dealing, the public domain and the Creative Commons (and other copyleft licenses) as a channel for personal and political creativity and expression (to be fair, both of these things are mentioned in the ‘resource’, but a single paragraph hardly does the Creative Commons justice, especially when it spend half the time emphasising that CC licenses are complex: “There are lots of different types of ‘Creative Commons’ licences, so make sure you always read the terms and conditions of these before applying them to your work or using material licensed under such a licence.”). How central is film piracy to these civics lessons?  The lesson structure: 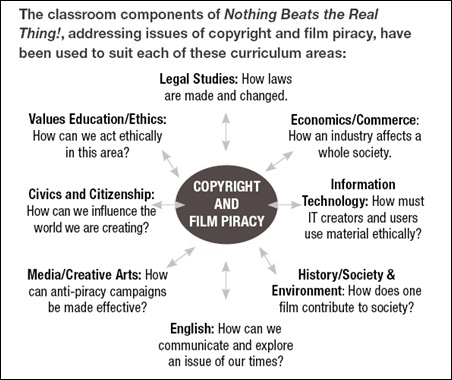 Is the ‘resource’ balanced?  I’ll leave you take a look for yourself (6Mb PDF), but I’ve never read an educational resource before which feels the need to include this disclaimer (p. 4.):

The resource is not a propaganda exercise. It does make clear to students that there are harmful consequences from film piracy, but it does so through educationally valid processes. It is an educational approach that allows students to face a significant civics and citizenship issue: their role in a society where many of them and their peers are breaking the law.

All I can say is I’d be really, really disappointed if this was the only resource secondary school teachers were provided when integrating lessons which combine copyright, creativity and civics in the classroom.

Update: Kim Weatherall has a detailed legal (and possibly more balanced) look at the case here. [Via Peter Black]

Update 2: After writing the EFA response, Nic Suzor has a very robust look at the case on his blog, too.