Over the next month, I’m lucky enough to be involved in three separate events focused on infancy online, digital media and early childhood. The details …

[1] Thinking the Digital: Children, Young People and Digital Practice – Friday, 8th September, Sydney – is co-hosted by the Office of the eSafety Commissioner; Institute for Culture and Society, Western Sydney University; and Department of Media and Communications, University of Sydney. The event opens with a keynote by visiting  LSE Professor Sonia Livingstone, and is followed by three sessions discussing youth, childhood and the digital age is various forms.  While Sonia Livingstone is reason enough to be there, the three sessions are populated by some of the best scholars in Australia, and it should be a really fantastic discussion.  I’ll be part of the second session on Rights-based Approaches to Digital Research, Policy and Practice. There are limited places, and a small fee, involved if you’re interested in attending, so registration is a must! To follow along on Twitter, the official hashtag is #ThinkingTheDigital.

The day before this event, Sonia Livingston is also giving a public seminar at WSU’s Parramatta City campus if you’re in able to attend on the afternoon of Thursday, 7th September.

[2] The following week is the big Digitising Early Childhood International Conference 2017 which runs 11-15 September, features a great line-up of keynotes as well as a truly fascinating range of papers on early childhood in the digital age. I’m lucky enough to be giving the conference’s first keynote on Tuesday morning, entitled ‘Turning Babies into Big Data–And How to Stop it’.  I’ll also be presenting Crystal Abidin and my paper ‘From YouTube to TV, and Back Again: Viral Video Child Stars and Media Flows in the Era of Social Media‘ on the Wednesday and running a session on the final day called ‘Strategies for Developing a Scholarly Web Presence during a Higher Degree & Early Career’ as part of the Higher Degree by Research/Early Career Researcher Day.  It should be a very busy, but also incredibly engaging week!  To follow tweets from conference, the official hashtag is #digikids17.

[3] Finally, as part of Research and Innovation Week 2017 at Curtin University, at midday on Thursday 21st September I’ll be presenting a slightly longer version of my talk Turning Babies into Big Data—and How to Stop It in the Adventures in Culture and Technology series hosted by Curtin’s Centre for Culture and Technology.  This is a free talk, open to anyone, but please either RSVP to this email, or use the Facebook event page to indicate you’re coming. 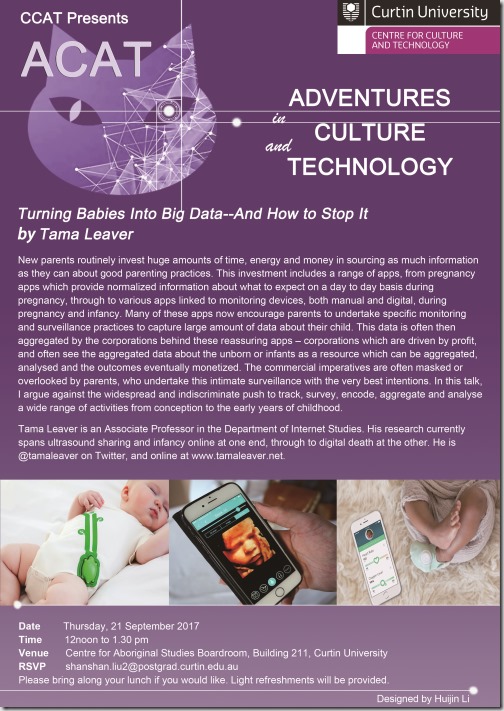 When exploiting kids for cash goes wrong on YouTube: the lessons of DaddyOFive

A new piece in The Conversation from Crystal Abidin and me …

The US YouTube channel DaddyOFive, which features a husband and wife from Maryland “pranking” their children, has pulled all its videos and issued a public apology amid allegations of child abuse.

The “pranks” would routinely involve the parents fooling their kids into thinking they were in trouble, screaming and swearing at them, only the reveal “it was just a prank” as their children sob on camera.

Despite its removal the content continues to circulate in summary videos from Philip DeFranco and other popular YouTubers who are critiquing the DaddyOFive channel. And you can still find videos of parents pranking their children on other channels around YouTube. But the videos also raise wider issues about children in online media, particularly where the videos make money. With over 760,000 subscribers, it is estimated that DaddyOFive earned between US$200,000-350,000 each year from YouTube advertising revenue.

The rise of influencers

Kid reactions on YouTube are a popular genre, with parents uploading viral videos of their children doing anything from tasting lemons for the first time to engaging in baby speak. Such videos pre-date the internet, with America’s Funniest Home Videos (1989-) and other popular television shows capitalising on “kid moments”.

In the era of mobile devices and networked communication, the ease with which children can be documented and shared online is unprecedented. Every day parents are “sharenting”, archiving and broadcasting images and videos of their children in order to share the experience with friends.

Even with the best intentions, though, one of us (Tama) has argued that photos and videos shared with the best of intentions can inadvertently lead to “intimate surveillance”, where online platforms and corporations use this data to build detailed profiles of children.

YouTube and other social media have seen the rise of influencer commerce, where seemingly ordinary users start featuring products and opinions they’re paid to share. By cultivating personal brands through creating a sense of intimacy with their consumers, these followings can be strong enough for advertisers to invest in their content, usually through advertorials and product placements. While the DaddyOFive channel was clearly for-profit, the distinction between genuine and paid content is often far from clear.

From the womb to celebrity

As with DaddyOFive, these influencers can include entire families, including children whose rights to participate, or choose not to participate, may not always be considered. In some cases, children themselves can be the star, becoming microcelebrities, often produced and promoted by their parents.

South Korean toddler Yebin, for instance, first went viral as a three-year-old in 2014 in a video where her mom was teaching her to avoid strangers. Since then, Yebin and her younger brother have been signed to influencer agencies to manage their content, based on the reach of their channel which has accumulated over 21 million views.