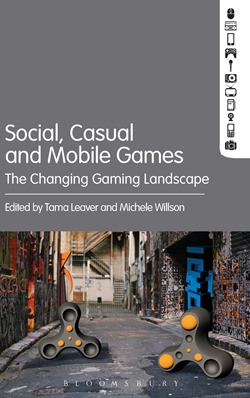 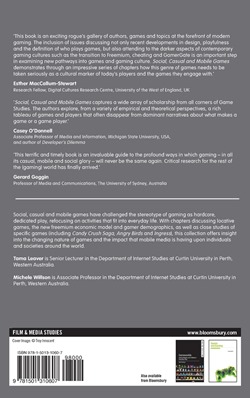 Social, Casual and Mobile Games: The Changing Gaming Landscape edited by myself and Michele Willson was published by Bloomsbury Academic in February 26 2016; it’s available for purchase on Amazon (including a much cheaper Kindle version); from Book Depository; Bloomsbury’s official website; and many other retailers.  A PDF preview of the opening material and first chapter of the book is available here. Moreover, the entire book is available to read freely online via a Creative Commons licensed open access version at the Bloomsbury Collections website.

The Table of Contents:

Part I: The (New?) Gaming Landscape

2. Who are the casual gamers? Gender tropes and tokenism in game culture
Lina Eklund

4. Casual gaming: the changing role of the designer
Laureline Chiapello

10. Riding in cars with strangers: a cross-cultural comparison of privacy and safety in Ingress
Stacy Blasiola, Miao Feng and Adrienne Massanari

13. The de-gamification of Foursquare?
Rowan Wilken

16. From premium to freemium: the political economy of the app
David Nieborg

19. Reflections on the casual games market in a post-Gamergate world
Adrienne Shaw and Shira Chess

Our thanks to academic, artist and game designer Troy Innocent for the awesome cover image!

“This terrific and timely book is an invaluable guide to the profound ways in which gaming – in all its casual, mobile, and social glory – will never be the same again. Critical research for the rest of the (gaming) world has finally arrived.” –  Gerard Goggin, Professor of Media and Communications, The University of Sydney, Australia

“This book is an exciting rogue’s gallery of authors, games and topics at the forefront of modern gaming. The inclusion of issues discussing not only recent developments in design, playfulness and the definition of who plays games, but also attending to the darker aspects of contemporary gaming cultures such as the transition to Freemiun, cheating and GamerGate is an important step in examining new pathways into games and gaming culture. Social, Casual and Mobile Games: The Changing Gaming Landscape demonstrates through an impressive series of chapters how this genre of games needs to be taken seriously as a cultural marker of today’s players and the games they engage with.” –  Esther MacCallum-Stewart, Research Fellow, Digital Cultures Research Centre, University of the West of England, UK

“Social, Casual and Mobile Games captures a wide array of scholarship from all corners of Game Studies. The authors explore, from a variety of empirical and theoretical perspectives, a rich tableau of games and players that often disappear from dominant narratives about what makes a game or a game player.” –  Casey O’Donnell, Associate Professor of Media and Information, Michigan State University, USA, and author of Developer’s Dilemma

“Ultimately, this collection offers a diverse and inclusive approach to mobile and casual gaming, successfully bringing together numerous approaches on an emergent and contemporary subject, while proposing various potential areas for future research. […] Social, Casual and Mobile Games offers an ambitious and stimulating perspective on the changing face of gaming and gamers.” – Rob Samuels, The University of Huddersfield, UK in Mobile Media & Communication.

“I think the answer is truly found within the pages of Social, Casual and Mobile Games: The Changing Gaming Landscape, which managed to, in its eclectic collection of topics and authors, provide the reader a sense of the sheer variety of work happening in Game Studies. Games are important not because they have “impact” but rather because of the form that they take. Game production is different from other forms of media production and that difference matters. Knowledge games are important because they produce knowledge differently than other forms of knowledge production. The effect of a game is interesting because the game produces its effect differently from other forms of media or entertainment. Even more simply, the game industry or game industries produce their cultural artifacts differently from many other industries. But, at the same time, there is not uniformity.” –  Casey O’Donnell, Michigan State University, USA in New Media and Society.