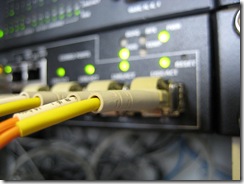 As part of their election campaigning, the Coalition yesterday released their $6billion broadband plan for the next eight years. To say the very least, it’s a bad policy, filled with either technical errors or misrepresentations, and does nothing to situate Australia as a major player in a digital economy. Earlier today I spoke with Travis Collins on RTR FM’s Morning Magazine about the Coalition policy.

It’s fair to say that the coalition’s approach to broadband is one of contempt and ignorance; you only need to watch our potential Prime Minister, Tony Abbott struggle to give any meaningful answers about the policy on last night’s 7.30 Report to see this is an area in which no significant thought or time has been invested. The ad hoc patchwork policy proposed simply milks a tiny bit more out of existing cables and infrastructure, with no long-term planning, no long-term development and a completely unrealistic assumption that private industry will want to invest in national fibre-optic infrastructure. As Mark Pesce clearly argues, there are speeds that can only be achieved, maintained (and, if needs be, expanded) using fibre; wireless and existing copper cables just can’t stretch much further, but the massive investment needed here is surely a national government priority.  We don’t expect private enterprise to fund the national roads; the government invests in these because it allows traffic to move across the country.  I would argue that the best way to understand our broadband needs are the same: get a high-speed network in place, and the investment, innovation and development will come.  Without it, innovation will stall and Australia’s position in the digital economy will be one of weakness and embarrassment.

Industry responses to the Coalition’s plan have been unanimously negative, with the only kind comments being for the one element that replicates a section already in Labor’s National Broadband Network plan. Indeed, David Braue’s recap on ZDNet of the Coalition’s last 24 hours of broadband discussion makes it crystal clear that they have no idea what they’re talking about when it comes to broadband, the internet, or most other things to do with telecommunications in Australia.  What is clear is that the Coalition’s plan would ensure Australia has one of the slowest internet capacities of any Western (and many other) countries today and for many years to come.  Sure, their plan is cheaper, but not buying things that you actually need is never a good policy.

Now, don’t get me wrong, I still think the time and energy Senator Conroy has wasted on an ineffective and unwelcome national internet filter is incredibly disappointing, but Conroy has already back-pedalled substantially, deferring the filter until a review of the Refused Classification ratings system in Australia. (And, implicitly, setting up this, or the likely senate balance of power going to the Green’s, as a way of saying he did his best on this promise, but was blocked by others.) In the meantime, the NBN is the best thing Conroy has worked on, and the current Labor NBN plan is a million times better for Australia, ensuring speeds that allow Australians to participate in the best, brightest and fastest developments online, rather than living in the slow, crawling digital backwater which could see Australia at the mercy of a new new tyranny of distance, lagging behind in the international digital economy.

[Photo by Manchester-Monkey CC BY SA]