While Peter Parker and his alter-ego Spider-Man have long been the iconic representation of the layperson (or everyperson) — the ordinary guy who, by accident rather than intent, became a hero — Captain America, in contrast, has always been stood for the ideals of the American dream and the democratic system at its heart. Captain America was created in the midst of World War II, and has fought the Nazis, communism and many other threats to the ‘American way of life’. Given his role, the demise of such a figure is more than a ploy to sell comic books (although it is that, too); it’s a commentary on the upheaval at the heart of what being American actually means. As Joe Simon, Cap’s co-creator along with Jack Kirby, has stated in interviews on the back of Cap’s death: “It’s a hell of a time for him to go. We really need him now.”

In July last year I wrote about the parallels between Marvel’s Civil War storyline and the ‘War of Terror’, noting that the Civil War stories borrowed heavily both from September 11 and the related special-edition tributes done by various comic book publishers. The image of Captain America’s sorrow was used powerfully both in Marvel’s renderings of the ruins of the World Trade Centre Towers and the tragedy which kick-started Marvel’s Civil War. During the past months, I was also impressed by the directness with which the Civil War stories appeared to address the situation in Guantanamo Bay when one of Marvel’s more jovial characters, Speedball – or Robert Baldwin – was arrested as an “an unregistered combatant” and locked away in a prison which seemed to exist outside of legal jurisdiction. To some extent that critique continues beyond the conclusion of the Civil War storyline as Robert Baldwin has now backed down and accepted Registration and become a new ‘hero’ (in the broadest sense of the word) under the guise ‘Penance’, a self-hating hero, wracked by guilt about the deaths his team unwittingly caused, and whose powers emerge proportionally to the amount of pain he’s in (it’s hardly a shock, then, that Warren Ellis is penning Thunderbolts, which now features Penance in the team’s line-up). 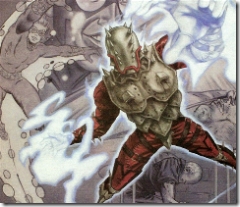 After those impressive beginnings, I was completely stunned at how badly the Marvel wrapped up its Civil War run, with Cap seemingly surrendering on a revelation — that the war between heroes was hurting a lot of innocent people in its wake — so mundane it bordered on stupid. That said, when Cap was actually gunned down by an assassin in Captain America #25, I could see where the story was supposed to have gone (I still think, though, that his death should have occurred in the last issue of the Civil War story, not another tie-in edition, even Cap’s own book). Cap’s death has altered the Marvel Universe, with even Tony Stark (Iron Man) privately admitting that the Civil War wasn’t worth the death of one of Marvel’s greatest icons (in Civil War: The Confession, yet another Civil war spin-off). There has been a lot of press about Marvel killing off one its core characters, but I think these stories are best summed up by Damian Fowler writing in The Guardian‘s books blogs with these insightful thoughts on ‘Why Captain America had to die’:

Created by Marvel comics in 1941 to battle the Nazis, the massively-pumped “Cap” was first seen punching Hitler in the face. Nice work if you can get it. But last week the patriotic crusader was shot and killed by a sniper in the latest issue of the long-running comic book.

Over the years, Captain America’s storyline has always reflected American moods and attitudes. When he first showed up, he was a sentinel of liberty and the fight for right. He was a mirror of everything that America stood for during the second world war. He always fought relentlessly for values that the US held dear.

How times change. Now he’s very much dead, something that was confirmed by the president and publisher of Marvel Entertainment. The New York Times all but wrote an obituary for the man, albeit in the arts pages, dead at 66. But it’s a sign of the times.

His demise is so much more than a tragedy in Toontown, even as the comic-book geeks mourn his passing. […] Cap’s death is being seen, analysed and discussed through the prism of national politics as a damning indictment of George Bush’s America. Even the major American TV networks picked up on the story, cutting images of the war in Iraq with the comic book images.

The Marvel Universe post-Captain America is an unfamiliar place. It’s a Marvel Universe in tune with the US and the Western world more broadly; a West which invaded Iraq four years ago but has to bring any semblance of stability to the region. With Cap’s shield gathering dust, his ideological opposite, Iron Man (a weapons manufacturer and alcoholic as well as a superhero) is now in charge of Marvel’s registered super-hero fighting machine (with a team in every state of the US). Spider-man, who revealed his identity during the Civil War, is now part of a small but notable underground resistance, but is also desperately trying to deal with the death of family members. Captain America’s death hangs over the comic book world, and leaves lasting questions about the direction and politics of the world of Marvel and its heroes.

However, As Benari Poulten reminds us, Captain America has been dead before and Steve Rogers has been replaced as Cap in the past, so it’s unlikely that the iconic hero will be gone from the Marvel universe for good. That said, Marvel have enjoyed amazing press and attention in the wake of the assassination of one of their key heroes — Cap’s demise even made ‘the Word’ on The Colbert Report and Steven Colbert now has Cap’s shield in his trophy case — so if death is to carry any weight at all in mainstream comic books, the inevitable return will have to be handled carefully, not just commercially. Personally, I think Steve Rogers should stay dead now, I think his death was representative of many things, including changes in Marvel both as a comic book universe and as part of a multi-national company. That said, words by Peter David about the X-Men titles are increasingly true about all comic book characters: “Mutant heaven has no pearly gates, only revolving doors” (X-Factor #70). If he can’t stay dead, Marvel, please earn any return of Captain America or one of your most striking characters will be diluted beyond a meaningful existence.

(Yes, the title of this post is a shameless adaptation of the Cap cartoon theme song; it’s also an homage to Henry Jenkins’ brilliant essay ‘Captain America Sheds His Might Tears: Comics and September 11’ which appeared in Daniel J. Sherman and Terry Nardin (eds), Terror, Culture, Politics: Rethinking 9/11, Indiana UP, 2006.)