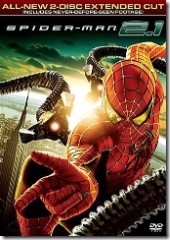 Having dedicated the final chapter of my doctoral thesis to examining the first two Spider-Man films as an exemplar of Artificial Culture, I really had to buy and watch the new Spider-Man 2.1 DVD, despite my constant annoyance at how these just-before-the-sequel extended edition DVD releases tend to disappoint. The 2.1 DVD set is advertised as having a new ‘Extended Cut’ of Spider-Man 2 with eight minutes new footage, while the second disc sports a bunch of ‘all-knew’ features. Sadly, the features on the extras DVD really don’t justify the creation of an disc. The ‘sneak peak’ and trailer for Spider-Man 3 don’t show anything not already floating around the legitimate parts of the internet, while the ‘VFX Breakdown’ is quite a laborious walk-through of the meshing of live-action, miniature and digital effects. I guess it’s hard to make these technical mini-docos all that interesting, but the Lord of the Rings DVDs did show it’s possible! I have the feeling VFX piece was shot for the original Spider-Man 2 DVD but cut since they’re just really dull.

Of more interest, the eight minutes of extra footage do change the tone of the film in important places. There’s a lot of extra character development for Harry and Mary-Jane; Harry’s friendship is reinforced in an extended version of Peter’s birthday party, while a new sequence between Mary-Jane and her friend highlights the fact that MJ is settling in her marriage rather than following her true love. Also, probably of more interest to the target audience, there are additional, CGI-heavy, shots added into Spider-Man’s fight sequences with Doctor Octopus. However, apart from some extra punches and scrapes, these don’t add anything notable to the story. Indeed, it’s worth pointing out this extended version isn’t labeled a ‘Director’s Cut’ as I suspect Rami was quite happy with the theatre-released version.

However, just when I thought the DVD was really quite a waste of money, I found myself laughing out loud at one unexpected sequence in which J Jonah Jameson “celebrates” Spider-Man’s retirement and The Bugle’s acquisition of the Spider-suit in an entirely unexpected but unforgettably funny way! Of course, the J Jonah Jameson clip is on YouTube: Be warned, though, this scene is much funnier in the context of the film. Forewarned, then, watching this clip by itself may prove less funny …

Since you’re no doubt just watched the clip anyway, I’d recommend against buying 2.1 – there’s nothing more to see.