I Can Stalk U

I Can Stalk U is another one of those very simple websites which highlights how information already being shared by people everyday may be used in ways we’ve not necessarily thought through. In a similar vein to Please Rob Me, which highlighted tweets where people indicated they were leaving their home, I Can Stalk U illustrates how much information many people are inadvertently sharing via the geographic photo tagging in many smartphones (including iPhones). On the I Can Stalk U website, each tweet that includes geotagged photos is translated (ie the metadata is read, and presented), showing the approximate address, this address on a Google Map, the picture it was attached to, and a link to the original tweet.  All of this information is publicly accessible, the website is simply putting the geotag information up front, rather than the original tweet.  Here’s an screenshot from the website: 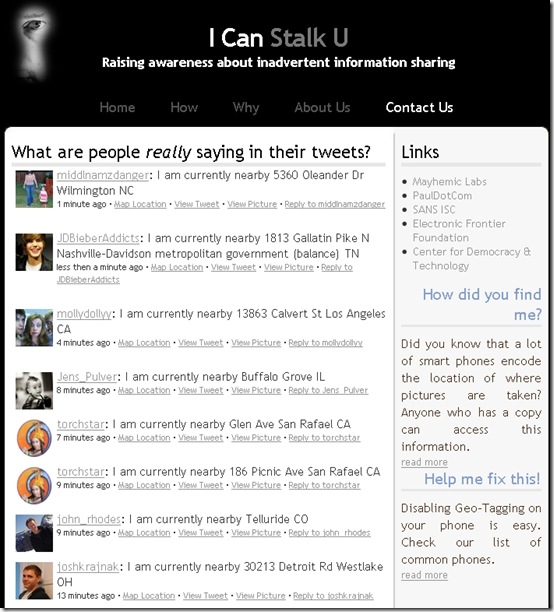 Often these sort of websites can be a bit confronting for people who’ve not thought about their privacy in relation to geotagged photos. The whole concept of metadata – literally, ‘data about data’ – which can so easily be embedded in photos, is a bit disconcerting for many people who may not have realised it was there. Thankfully, despite the initially confronting website, I Can Stalk U is set up as an educational tool, showing what data is unknowingly being shared, and telling you how to fix that if you don’t want this information out there on the web. On their ‘How’ page, the I Can Stalk U folks provide details on how to disable geotagging for iPhones, Blackberries and some other popular smartphones.  If you’ve got one and it’s not on the list, it’s worth disabling the geotagging unless you’re 100% comfortable with every photo you take (and share) embedding the where, when and on what that photo was taken.

Links for August 4th 2010 (definitely not endorsed by any version of Andrew Bolt):