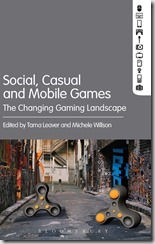 Social gaming (games played via social networks) and casual games (games usually played on mobile devices, such as the iPhone) are a significantly different form of gaming from more recognisable videogames, such as MMORPGs, first-person shooters and so on. As part of an ARC-funded linkage project, I explored Zynga’s Farmville and Rovio’s Angry Birds as significant exemplars of social and casual gaming respectively. Building on this research, Michele Willson and I edited a collection published by Bloomsbury Academic in 2016 entitled Social, Casual and Mobile Games: The Changing Gaming Landscape, which includes my chapter on ‘Angry Birds as a social network market’. Since then I have continued to be interested in the way mobile games have developed, with a focus on Pokémon GO and augmented reality games.

The following publications and presentations are outputs from this research area:

Leaver, T. (2019) ‘What Made Pokémon Go? Mobile Games, Casual Players and the Importance of Location’. Keynote address to the U40 China-Australia Summer School/Symposium, Centre for Culture & Technology and Tencent Research Centre, Curtin University.