As part of Curtin University’s new The Future Of podcast series, I was recently interviewed about my ongoing research into pre-birth and infancy at one end, and digital death at the other, in relation to our presence(s) online. You can hear the podcast here, or am embedded player should work below: 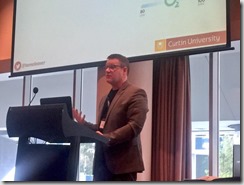 At yesterday’s outstanding Controlling Data: Somebody Think of the Children symposium I presented the first version of my new paper “Intimate Surveillance: Normalizing Parental Monitoring and Mediation of Infants Online.” Here’s the abstract:

Parents are increasingly sharing information about infants online in various forms and capacities. In order to more meaningfully understand the way parents decide what to share about young people, and the way those decisions are being shaped, this paper focuses on two overlapping areas: parental monitoring of babies and infants through the example of wearable technologies; and parental mediation through the example of the public sharing practices of celebrity and influencer parents. The paper begins by contextualizing these parental practices within the literature on surveillance, with particular attention to online surveillance and the increasing importance of affect. It then gives a brief overview of work on pregnancy mediation, monitoring on social media, and via pregnancy apps, which is the obvious precursor to examining parental sharing and monitoring practices regarding babies and infants. The examples of parental monitoring and parental mediation will then build on the idea of “intimate surveillance” which entails close and seemingly invasive monitoring by parents. Parental monitoring and mediation contribute to the normalization of intimate surveillance to the extent that surveillance is (re)situated as a necessary culture of care. The choice to not survey infants is thus positioned, worryingly, as a failure of parenting.

An mp3 recording of the audio is available, and the slides are below:

The full version of this paper is currently under review, but if you’re interested in reading the draft, just email me.