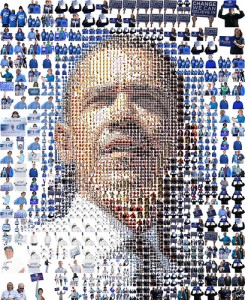 Obama’s victory has people celebrating across the world for so many reasons, but given my preoccupations, it should come as no surprise that part of my joy comes from his decidedly forward-thinking policies toward digital culture. As, for example, Barry Saunders has argued in his ABC story:

The exemplar of a successful political campaign’s use of social media is … Obama’s campaign. Foregoing public funding and the big money of lobbyists, Obama has raised enormous amounts of money from primarily small donors, at last count over $US390 million. Obama claims this will allow him to reduce lobbyist influence in government, though inevitably, the truth is somewhat more complex than that.Obama’s campaign has also make powerful use of social networking tools such as Twitter, MySpace-style social networking sites and even an iPhone application. This commitment to using tools to engage with a primarily younger, tech savvy audience, combined with an commitment to Network Neutrality and a progressive tech policy (Barack Obama on technology and innovation – PDF) has certainly helped his support amongst younger voters. McCain’s admission that he doesn’t know how to use a computer hasn’t helped his regain any of that support.

Indeed, Obama’s use of digital networks wasn’t just an organizational tool, but an avenue to encourage the creativity of his supporters, as Sarah Lai Stirland noted in Wired a few days ago:

Obama’s online success dwarfed his opponent’s, and proved key to his winning the presidency. Volunteers used Obama’s website to organize a thousand phone-banking events in the last week of the race — and 150,000 other campaign-related events over the course of the campaign. Supporters created more than 35,000 groups clumped by affinities like geographical proximity and shared pop-cultural interests. By the end of the campaign, myBarackObama.com chalked up some 1.5 million accounts. And Obama raised a record-breaking $600 million in contributions from more than three million people, many of whom donated through the web. … In many ways, the story of Obama’s campaign was the story of his supporters, whose creativity and enthusiasm manifested through multitudes of websites and YouTube videos online. It even resulted in volunteer contributions like the innovative Obama ’08 iPhone and iTouch application that enabled owners to mobilize their friends and contacts in battleground states through the Apple devices.

On the digital front, Obama’s administration is already looking very promising from an open access perspective, and, as Barry notes above, may actually enshrine Net Neutrality, too! Given the deft hand the Obama team have used in engaging with young voters via digital tools and communities, it’s probably no surprise to hear that Obama’s victory speech has already clocked over 100,000 downloads via Bittorrent networks!

Meanwhile, Republican party insiders seems to be falling over themselves to point out how ‘ignorant’ Sarah Palin really is, but what does that actually say about the presidential candidate that chose her as a running mate? Oh well, it really doesn’t matter any more; I can’t really see predictions of Palin 2012 being much to worry about.

Perhaps of more concern for the hip and ironic youth of today is a piece by Dan Kois in the NY Times’ Culture Vulture asking ‘Can ‘The Daily Show’ Survive the Barack Obama Presidency?‘ What will Jon Stewart and his team satirize in a hopeful, forward-thinking, globally-minded American under Obama? I suspect there’ll still be a few things worth making fun of, but I’m sure Jon Stewart would agree, if it came down to The Daily Show or Obama, Stewart would still be voting Obama! Besides which, plenty of Americans are still doing really stupid things; drowned out by all the celebrations was the fact that in the same electoral process, Californians voted to remove the rights of gay people to marry; I think The Daily Show team might just have some new targets!

The video, though, that really caps the viral video war which has been one of the most engaging elements of the presidential campaigning, the video that shows behind a sexed-up meme can be real joy, is this little capture of Obama girl celebrating becoming President-Elect girl in Times Square …

[Via] [Image: ‘Barack Obama: A mosaic of people‘ by tsevis CC BY NC SA]