Marvel’s statues folk have really out-done themselves with these uber-sexist models of Mary-Jane: 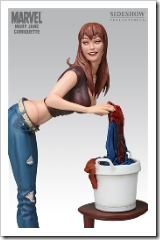 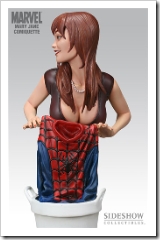 As one would rightly imagine, there is considerable disappointment and outrage about this image. While comic books have never exact been modest in their representation of women (or men), this particular statue is ridiculously misogynistic and patronising, even by the standards of early comic books, let alone the twenty-first century. Nor, sadly, is this a unique case, evinced by more examples in ArcanaJ’s “Comics Industry Bullsh*t” Flickr set.

While such an image is clearly sexist, whatever the context, it’s doubly disappointing to see Mary-Jane, who has always been at least a strong, active figure in the comic books, reduced to the sexed-up laundry lady. The latest film, I guess, really doesn’t do much to argue with such a representation – there were moments, there, but MJ was a sadly under-developed character in Spider-Man 3. However, given the huge number of people, and especially kids, looking to find their heroes in comic-books and the films they inspire, this, and similarly images, really need to scrubbed out.

In a different way, Nancy Lorenz replies even more forcefully (and graphically) by showing how ridiculous Spider-Man would look in this pose!

[Via Falling Apart In Half Time]

Update (18 May, 9.45am): Boing Boing links to a post by artist Tom Hodges, a friend of Adam Hughes (who designed the MJ statue). Hodges post includes these comments:

Now I may be wrong, but ANYONE who complains about this piece obvious does NOT read Superhero comics. If you did, I’d consider you a hypocrite. I enjoy the Indie stuff (SiP and Lenore) but without Spider-man, X-Men and other comics, they wouldn’t exist. Do you think Terry Moore is offended by this piece? I HIGHLY doubt it!

That’s probably a fair point; most indie comics came into being on the back of the success of the superheroes comics (and funnies) in establishing comic books as a recognisable form of entertainment and (although more controversially, even today) art. Also, I think Hodges is right in that this statue is not an outlier, but rather representative of a large part of the way Marvel, DC, and many independent comic books, represent women and men. I did read superhero comics a fair bit when I was younger and occasionally pick up stuff at the moment (I enjoyed parts of Marvel’s Civil War and have been consistently impressed by the current Justice mini-series by Alex Ross et al). That said, I think that what this statue represents is the worst aspects of this tradition; I don’t think Adam Hughes should bare the blame for the conventions of much of the art in the superhero genre, but I do think his representation lacked subtlety enough to crystallize the sexist nature of many comic books, even today.

Hodges also suggests this statue may be ironic – pointing out that Mary-Jane in the comics is a far more successful supermodel. Even if that was the intention, I fear it’ll be lost on the majority of people who purchased the statue.