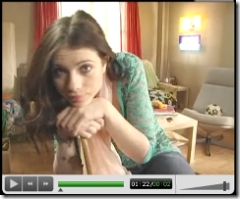 I’m not a huge Law and Order watcher, and I’ve no idea how far the Australian schedule differs from the US one, but I was fascinated to hear (somewhat after the fact) that in November last year the Criminal Intent version of the tv franchise featured an episode which built directly on hype around LonelyGirl15.

The episode — and the fictional videoblog series — was called ‘Weeping Willow’ (instead of lonelygirl15) and instead of YouTube it was said to feature on ‘YouLenz’.  I’d love to see the episode and will hunt it down one day, but what I found really impressive was the fact that the videoblog episodes created for Law and Order (still) appear online; check them out at FreeWillow17.com.  These videoblog clips mimic the style and substance of lg15 really well; from the (early) dynamic between Bree and Jonas to the use of a handpuppet and the bedroom set.  It was a little odd to see Buffy’s little sister (MichelleTrachtenberg) playing a character called Willow, but these are really well produced clips nevertheless.

If anyone knows when this episode will screen in Australia, please let me know!